What does it mean for an algorithm to be biased?

In U.S. law, unintentional bias is encoded via disparate impact, which occurs when a selection process has widely different outcomes for different groups, even as it appears to be neutral. This legal determination hinges on a definition of a protected class (ethnicity, gender) and an explicit description of the process.

When computers are involved, determining disparate impact (and hence bias) is harder. It might not be possible to disclose the process. In addition, even if the process is open, it might be hard to elucidate in a legal setting how the algorithm makes its decisions. Instead of requiring access to the process, we propose making inferences based on the data it uses.

We present four contributions. First, we link disparate impact to a measure of classification accuracy that while known, has received relatively little attention. Second, we propose a test for disparate impact based on how well the protected class can be predicted from the other attributes. Third, we describe methods by which data might be made unbiased. Finally, we present empirical evidence supporting the effectiveness of our test for disparate impact and our approach for both masking bias and preserving relevant information in the data. Interestingly, our approach resembles some actual selection practices that have recently received legal scrutiny.

Paper in PDF format, from arxiv.

See also the Fairness, Accountability, and Transparency in Machine Learning workshop where Sorelle talked about this work, and this post where I give some more context. 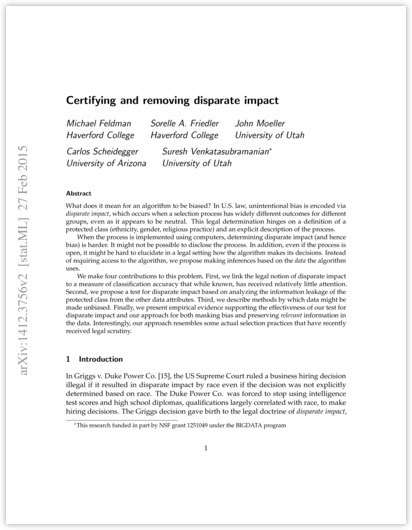