Predictive policing systems are increasingly used to determine how to allocate police across a city in order to best prevent crime. Discovered crime data (e.g., arrest counts) are used to help update the model, and the process is repeated. Such systems have been empirically shown to be susceptible to runaway feedback loops, where police are repeatedly sent back to the same neighborhoods regardless of the true crime rate.

In response, we develop a mathematical model of predictive policing that proves why this feedback loop occurs, show empirically that this model exhibits such problems, and demonstrate how to change the inputs to a predictive policing system (in a black-box manner) so the runaway feedback loop does not occur, allowing the true crime rate to be learned. Our results are quantitative: we can establish a link (in our model) between the degree to which runaway feedback causes problems and the disparity in crime rates between areas. Moreover, we can also demonstrate the way in which reported incidents of crime (those reported by residents) and discovered incidents of crime (i.e. those directly observed by police officers dispatched as a result of the predictive policing algorithm) interact: in brief, while reported incidents can attenuate the degree of runaway feedback, they cannot entirely remove it without the interventions we suggest.

To appear at the inaugural Conference on Fairness, Accountability, and Transparency, 2018. 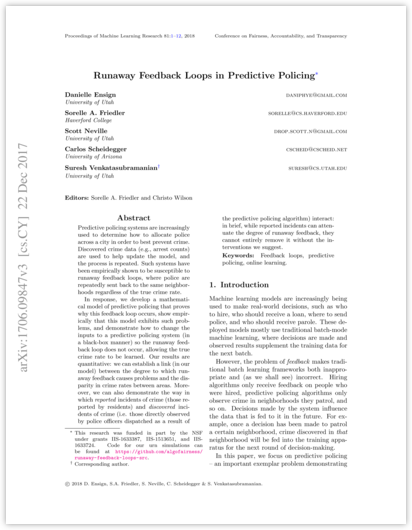