So you want to look at a graph, part 2

This series of posts is a thorough examination of the design space of graph visualization (Intro, part 1). In the previous post, we talked about graphs and their properties. We will now talk about constraints arising from the process of transforming our data into a visualization.

What is in a sheet of paper? Marks 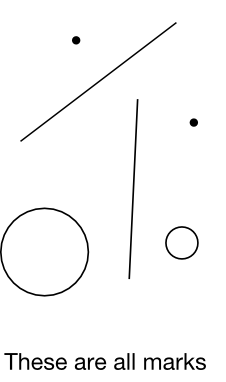 Paper is like external memory. We can make marks on it, and later we can read marks that we made on a particular spots. We will say then that visualizations are encodings of data as particular configurations of marks on paper. The process of “reading a visualization”, of getting the dataset back into our heads, is simply the decoding of the marks of paper into what they mean. I will refrain from defining a mark precisely: it is only important that the writer and the reader both agree as to what constitutes one, and that they’re both capable of reading and writing marks. Let’s see how far this notion takes us.

We can draw marks of different shapes, and we use the difference between the shapes to encode aspects of our data. Using this idea, we could just write down a description of a graph in english prose. If we wanted to “visualize” the data, we would then literally read the prose, reconstruct the graph in our heads, and be done. But this is not a visualization!

If we went ahead with this boneheaded idea, we would clearly be employing our visual system to read the prose describing the graph, even though no one in their right minds would describe that encoding as “visual”. One reason for this is we know that the process of reading prose feels fundamentally different than the process of looking at a scatterplot, or other abstract graphical depictions. So let’s constrain our encodings to be “graphical” in nature. I’ll keep this notion underspecified, but for now think of it as requiring encodings to only be configurations of dots, lines, circles and their shapes and positions. This makes the encoding more “visual”, and that should be enough.

Even the simplest possible abstract encoding can go boink

When there are two dot marks on a piece of paper, it turns out that we immediately see that these two marks have some distance between them. Given two marks written on paper, I can then read a real number, in principle to arbitrarily large precision. Since we know how to read and write this configuration, we know how to encode a number as distance between two points.

This two-mark encoding appears to be completely innocent and boring, but it turns out that we can already get ourselves in deep trouble if we’re not careful! If you’ve ever read about Godel encodings, you should have started feeling uneasy around where I said “arbitrarily large precision”. With arbitrarily large precision, I can encode a number with as many decimal places as I want, and I can define the encoding of my graph to be, roughly, the ASCII string representing the graph vertices, edges and properties. Furthermore, this encoding is lossless. 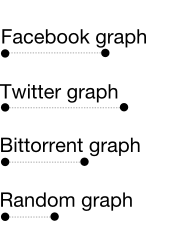 Although encoding an entire graph as a single distance between two points is valid, it’s clearly ludicrous. What went wrong? Remember that we decided the prose encoding was bad because “it wasn’t visual”. Now this new encoding of ours is (superficially) visual, but it feels similarly bad to the prose encoding. One thing the two encodings have in common is that the part of the decoding process that confers “graphitude” to the data does not seem to come from our vision system, but from some other part of the brain. We are using arbitrarily small differences in distances to distinguish potentially arbitrarily large differences in graphs, this encoding needs “additional decoding”. Somehow, there are these visual bits (in this case, a distance) which get sent to other parts of the brain for further interpretation. And this indirectness is precisely what is bad about the encoding.

A good visual encoding is “direct”. Such encodings get their “meaning” straight from the vision system, without requiring an explicit “reading”. This notion should be familiar to you, if you read Bertin before: it is related to his ideas of “perception of correspondences” and “retinal legibility” in Semiology of Graphics.

How is any of this at all relevant?

At this point, you may be thinking that this entire discussion is a gigantic waste of time, a treatise in picking nits. But the fact of the matter is that arguing about the effectiveness of different visualization techniques is exactly arguing about encoding choices. And if we ever hope our theoretical arguments to be valid regardless of which encoding we use to examine, we need to be able to articulate why stupid encodings like the above are, in fact, stupid. 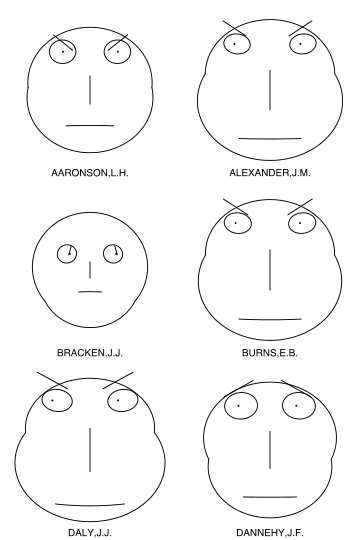 And even armed with the simplest of the observations above, we can already make some nontrivial statements. If you’ve ever heard about Chernoff faces and wondered why they’re a terrible idea, worry no more. Remember that the idea behind Chernoff faces is that since we’re incredibly good at face recognition, then we should encode different attributes of our data as different aspects of a face. (If you’ve never heard about them before: yes, they are hilariously bad. But I assure you they were proposed completely seriously.)

So why are Chernoff faces bad? It’s simple: although recognizing different faces and telling them apart is something we do thousands of times a day, we almost never think “yes, George Clooney’s face is different from Julia Roberts’s face because his eyes are obviously 12.3% larger, his ears are 15.7% smaller, and his nose is half as hooked.” In fact, Chris Morris, David Ebert and Penny Rheingans have experimentally confirmed this: Chernoff faces are not pre-attentive. The important point is that even though we can, given enough time, make precise judgements of face proportions, the values don’t jump at us: we have to read faces in the same way we would read numbers from a spreadsheet. And, if the encoding forces me to read, then it’s not a visual encoding at all. If they were visual, we’d just stick with spreadsheet rows in the first place!

The above argument means that, right now, settling almost every question of which visual encodings are good and which are bad (and at what) needs the heavy lifting of experiments in perceptual psychology. Morris, Ebert and Rheingans’s study is important, and appears to answer that one question definitively. But we would like to have a theory which would explain, ahead of time, why Chernoff faces are bad, and many other ideas we might have, without needing to recruit 500 people on Mechanical Turk. I might come back to this later on in the series, when we have enough theory under our belts to actually say something about Chernoff faces. Still, a lot of work has been done in evaluating visual encodings in isolation, and we will have to recap the most important ones.

Next: what do we know about good visual encodings, and can we use these encodings directly for graph visualization? If not, why not?